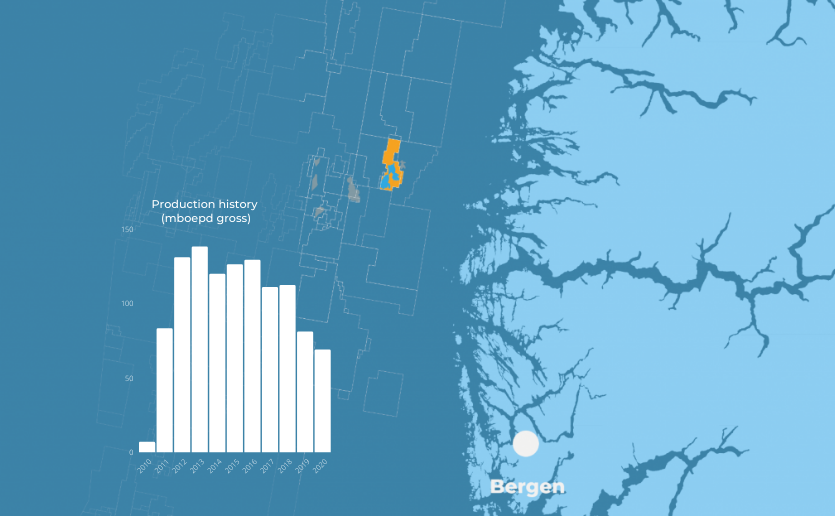 The water depth in the area is 360 metres. Gjøa was discovered in 1989, and the plan for development and operation (PDO) was approved in 2007. The field is developed with five subsea templates. The Gjøa facilities are partly supplied with power from shore. The Vega and Vega Sør fields are tied-back to Gjøa for processing and further export. Production started in 2010.

The reservoir contains gas above a relatively thin oil zone in sandstone of Jurassic age in the Dunlin, Brent and Viking Groups. The field comprises several tilted fault segments with partly uncertain communication and variable reservoir quality. The reservoir depth is 2,200 metres.

The field is produced by pressure depletion. In the southern segments, oil production was prioritised in the first years. Gas blow-down, production of the gas cap, started in 2015. Low pressure production was implemented in 2017.

Stabilised oil is exported by pipeline connected to Troll Oil Pipeline II, for further transport to the Mongstad terminal. Rich gas is exported via the Far North Liquids and Associated Gas System (FLAGS) on the UK continental shelf, for further processing at the St Fergus terminal in the UK.

The successful start-up of production from the Gjøa P1 project in February 2021 underlines the platform’s position as an important hub and increases total remaining developed reserves at Gjøa by 30%. Good reservoir management has already extended the field life considerably and Gjøa is now set to produce in excess of 100 mmboe more than what was estimated when production started in 2010.